This may surprise you but there are still pick your own farms right here in London where you can pick your own fruit and vegetables from rhubarb and asparagus in April through strawberries in June to apples and pumpkins in October.

And luckily there are still pick your own farms in all parts of London so wherever you live in the city you can enjoy some PYO fun at a farm near you.

Pick your own farms are obviously a great way to stock up on seasonal fruit and vegetables cheaply but a trip to a PYO farm is also a fun day out for the whole family from little kids to grandparents.

The guide takes you through what’s available to pick at each farm, tells you how to get there by public transport so we call all drive less and has suggestions for nearby attractions so you can have a big day out in London.

Quick Guide To London Pick Your Own Farms

Garsons is the big granddaddy of PYO farms in London. It’s enormous and very smart and has a big garden centre with fancy cafes.

Summer fruit including strawberries and raspberries are the big crops from June but they actually have over 30 different crops including sunflowers, a wide range of vegetables and apples and pumpkins for Halloween.

The pick your own strawberry season is longer at Garsons than some of the other farms as they are in covered raised beds which also means less bending!

Garsons Pick Your Own Farm is in south west London near Chessington.

Unfortunately, it’s not too easy by public transport. You need to get a train to Esher and then a bus and it’s still a 15 minute walk after that.

If you go by car, it’s worth knowing that Brooklands Transport Museum and the National Trust’s Claremont Landscape Garden are less than 15 minutes away.

Hewitts PYO Farm is a traditional pick your own farm in south London.

It’s as different from Garsons Farm as you can possibly get being a small, family run farm with no facilities except a tiny shop where you pay for your fruit and vegetables and some outdoor loos.

But it is delightful.

The family farm pretty organically and there are beautiful avenues of trees, hedgerows and wild flowers around the picking fields.

It really is a throw back to a simpler, easier time and wonderful antidote to the hustle and bustle of London.

The pick your own season starts in June with strawberries, raspberries, redcurrant and gooseberries and goes right through to October with pumpkins and even sometimes November for the last of the apples.

Apples and plums are Hewitts big thing and the orchards are wonderful.

You can get to Hewitts by direct train to Knockholt from Charing Cross, London Bridge and Cannon St or by changing at Orpington from Victoria.

It’s a 10 minute walk from Knockholt station. Turn left onto a footpath just outside the station on London road. The footpath will take you over the A21 and a golf course – look out for orchids – and you then have to cross the A224 to the farm. It is a busy road so you do need to be patient and careful.

If you drive, it’s worth knowing that Charles Darwin’s home Down House and Lullingstone Roman Villa are less than 15 minutes drive away so make a great combined day out. High Elms Wood is also an easy drive away.

Parkside Farm is a small pick your own farm in north London.

The crop calendar starts with strawberries, raspberries and gooseberries in June through redcurrant and blackcurrant to blackberries in October.

The strawberries are grown on raised beds so have a longer season, lasting through until September.

Parkside has a range of pick your own vegetables including beans, beetroots, marrow and sweetcorn but doesn’t typically have pumpkins.

To reach Parkside Farm by public transport, take a train to Gordon Hill on the Hertford Loop from Finsbury Park and then a bus to Chase Farm hospital. It’s a 10 minute walk from the hospital to the pick your own farm.

If you’re driving, Parkside Pick Your Own is just a 10 minute drive from the lovely historic houses of Forty Hall, Capel Manor Gardens & Myddleton House so you could easily combine these with fruit picking for a big day out.

Stanhill Farm is a small pick your own farm in south east London on the edge of lovely Joydens Wood.

You can pick strawberries and raspberries from June to September. You can also pick your own vegetables including beans, tomatoes, peas, beetroot and cucumbers plus pumpkins in October. There are also a few rows of pretty sun flowers.

It is only a small farm but you can easily combine a lovely time picking fruit and vegetables with outdoor fun in Joydens Wood. The lovely Tudor historic house Hall Place is also less than 10 minutes drive away and the B12 bus runs between the two of them.

To reach the PYO farm by public transport take the train to Swanley or Bexley and then the 429 or B12 bus respectively.

Crockford Bridge PYO Farm is a pick your own farm tucked away just inside the M25 near Weybridge in south west London.

The Crockford Bridge pick your own season starts unusually early for London pick your own farms with rhubarb and asparagus available in April.

Strawberry picking starts in June and you can also pick your own raspberries, blackberries, gooseberries, redcurrant and blackcurrant.

You can pick your own vegetables including peas, beans and marrows and there are also PYO pumpkins, sunflowers and even Christmas trees.

The PYO farm is about 15 minutes walk from Addlestone train station on the Weybridge line from Waterloo with trains every 30 minutes.

The farm is 10 minutes drive from Brooklands Museum if you want to combine fruit picking with something else for a big day out in London.

The two Copas PYO Farms are outside London being the other side of the M25 but still close enough for a day out fruit picking near London. They have one farm in Cookham and one in Iver.

Both PYO farms open early in April for asparagus picking.

The two farms also offer strawberry picking plus blackcurrants and raspberries a few vegetables and apple and plum orchards.

For the Iver farm take the train from Paddington to Langley and then the bus to Shreding Green from where it’s a 15 minute walk.

For the Cookham farm take the train from Paddington to Cookham from where it’s a 15 minute walk or you can take the 37 bus.

Flower PYO Farm is another pick your own farm just outside London beyond the M25 which makes a great day out from London fruit picking.

From June there are pick your own strawberries and raspberries. Additionally Flower Farm has plum orchards and pick your own cherries. There is also a pumpkin patch for PYO pumpkins in October.

Flower Farm also has a tea room, home brew tap room and pub garden on offer as well as fruit picking plus a big farm shop.

Flower Farm is about a 15 minute drive from Chartwell and Harewoods a National Trust property if you want to go fruit picking as part of a big day out in London.

Calcott Hall is a farm just outside Brentwood with a farm shop, butchers, fishmongers and cafe plus in the autumn a pick your own pumpkin patch.

There are buses from Brentwood station with a dedicated Farm Shop stop just 5 minutes or so walk from the farm itself.

Foxes Farm has a pick your own pumpkin patch near Basildon. A bus runs from Basildon station to the farm.

Bloomfield Fruit Farm is a traditional fruit picking farm in Essex with pick your own strawberries and soft fruit.

The farm is close to the lovely Epping & Ongar steam railway and a handy bus runs from Ongar station to Bobbingworth mill just 5 minutes walk from the farm.

And there you go, a complete guide to pick your own farms in London plus fruit picking near London. It really is a lovely day out for the whole family.

For more ideas for fun things to do in London do check out these guides: 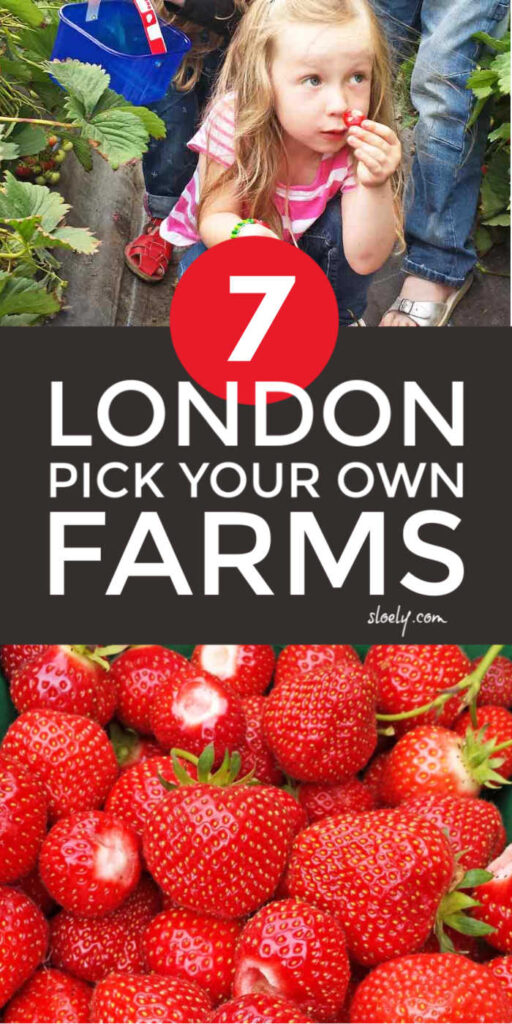