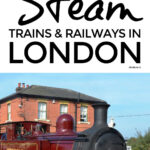 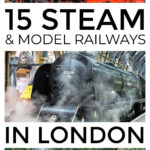 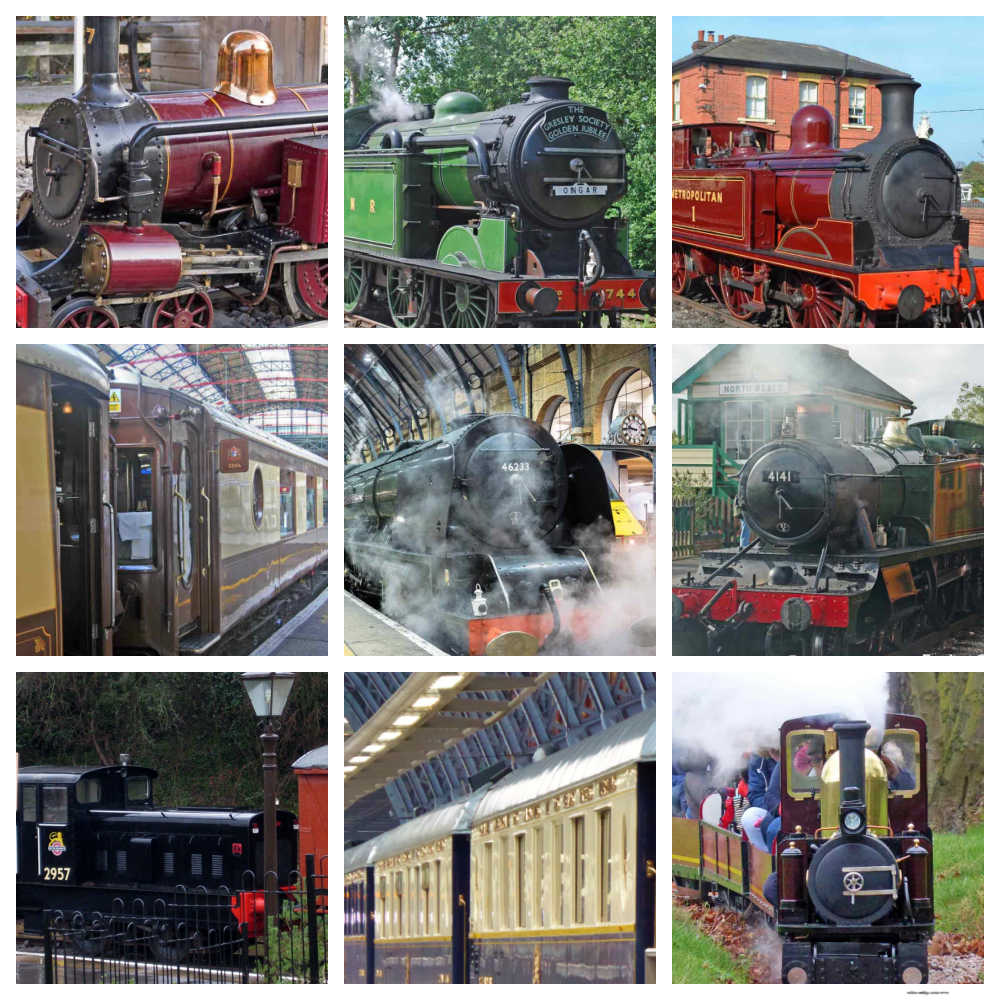 If you’re looking for steam train rides in London, you’re in luck.

There are actually all sorts of steam trains and steam railways still running in London that offer steam railway rides and day trips and the chance to see some of the most famous steam trains of all time up close.

So if you or your kids or grandkids are mad about steam trains do check out this guide to steam trains and railways in London. It covers all the best places to see and ride steam engines in London plus some very cool model railways of all sizes you can visit.

I do hope you enjoy a great day out riding London’s steam trains. For more ideas for family days out, do check out my other guides to fun things to do in London.

The Epping and Ongar Railway is without doubt, the best place to ride steam trains on a full size steam railway in London.

The railway runs on an old branch line just beyond beyond beautiful Epping Forest in east London and is great day out for any young Thomas the Tank engine fans.

The railway has three main steam engines plus some old diesel trains but also has guest steam trains visiting. There is also a lovely old Routemaster bus that will pick you up from Epping tube or Shenfield station to take you to the railway.

The railway runs every Saturday and Sunday throughout the year plus more frequently during the holidays and there are regular special events.

A family ticket for the whole day is usually just over £30 but discount vouchers are sometimes available so it is worth doing a quick search.

For a really big day out you could combine the railway with strawberry picking at nearby Bloomfield Fruit Farm. There is a bus from Ongar station to the farm.

The steam trains on the Epping & Ongar Steam Railway are Thomas the Tank Engine and Edward sized branch line trains, but you can actually see Gordon and Henry sized steam trains running out of mainline London stations most weeks of the year.

The steam trains are pulling excursion trains but even if you don’t want to go on the excursion you are still allowed onto the platform under Network Rail rules to see the trains and take pictures.

This is a great simple way for little train enthusiasts to see beautiful old steam trains such as the Scots Guardsman and the Duchess of Sutherland or most spectacularly the Flying Scotsman. 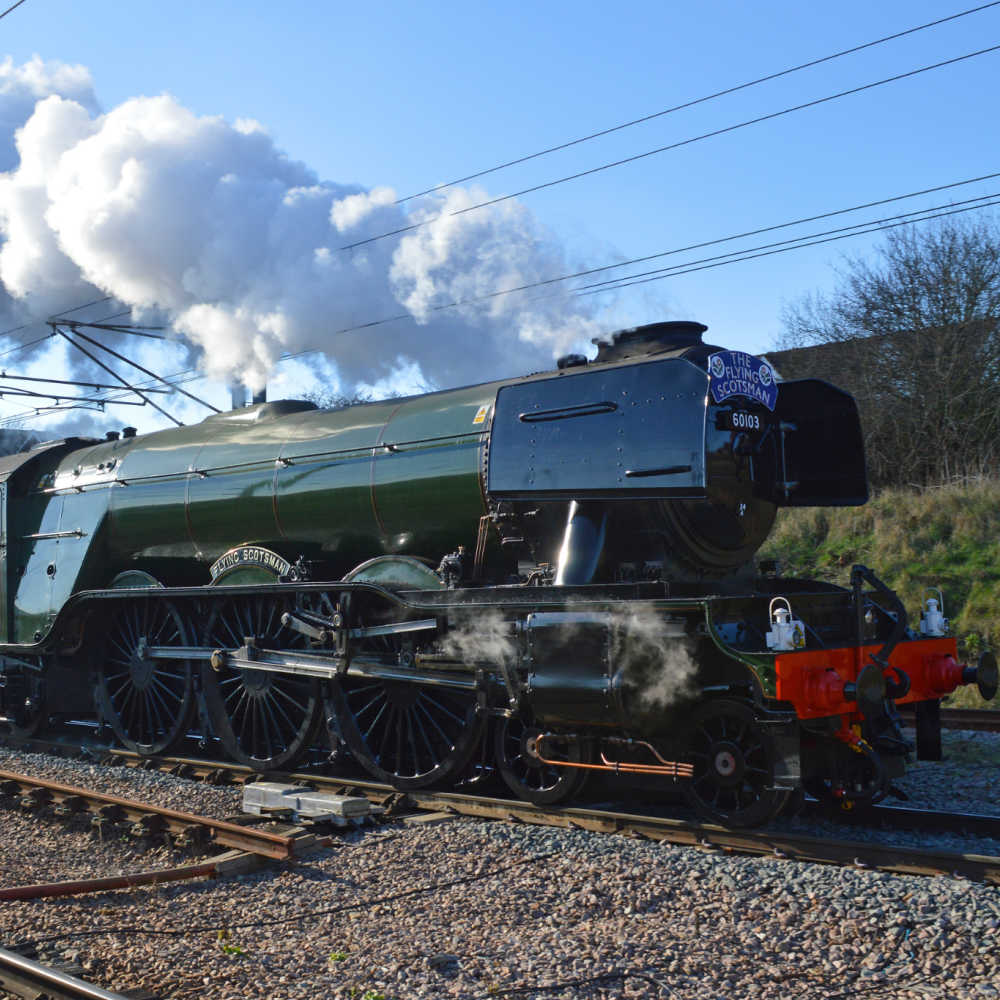 The Flying Scotsman was a world record breaking steam train that used to run between London and Scotland and has to be Britain’s most famous steam train.

The old Orient Express carriages are unquestionably glamorous but the train is now pulled by a diesel engine so if you’re desperate to see an actual steam train, you’re better off going to see the Flying Scotsman.

It includes all sorts of steam trains and engines that can’t be displayed in the main museum including the London Transport Miniature Railway.

The depot is not open the whole time but there are open days in the holidays and you can book private tours.

The Ruislip Lido Railway is a great day out for kids who love trains in London as the engines run around the Ruislip lake lido which has a little sandy beach and through the Ruislip woods which are seriously brilliant for tree climbing.

The railway has a lovely steam engine Mad Bess but she doesn’t run the whole time so do check the time table. The train ride is still great fun even without the steam engine and includes seeing the engine turned on a turn table which is great fun for little train fans.

The journey takes roughly 20 minutes and is about £10 for a family of 4.

The Hampton & Kempton Waterworks Railway is a small steam railway in west London London built on an old railway that served the waterworks which are now the Kempton Steam Museum.

The Steam Museum includes some of the world’s largest steam engines.

The Thames Ditton Model Railway is a must for steam train aficionados in London. The steam trains are small but they are beautiful.

There is a both a ride on model railway with multiple steam engines and a miniature railway plus junctions, signal boxes, a locomotive shed and a turn table, so there’s enough to keep steam train mad kids entertained for the afternoon.

The railway is open Sundays and bank holidays and does get busy. The railway is about 15 minutes walk from Thames Ditton station.

The Brockwell Park Miniature Railway is little ride on railway in a popular south London park in Herne Hill near Brixton.

The railway line is only short and the trains only run on Sundays but it is fun for very small children and Brockwell Park is a lovely place to idle away a sunny Sunday afternoon.

There is a tiny steam train on the Brockwell Park Railway but it does only run occasionally.

The Swanley New Barn Railway is a ride on miniature railway in Swanley Park with a good number of very lovely 2-4-0 large narrow gauge steam and diesel engines. 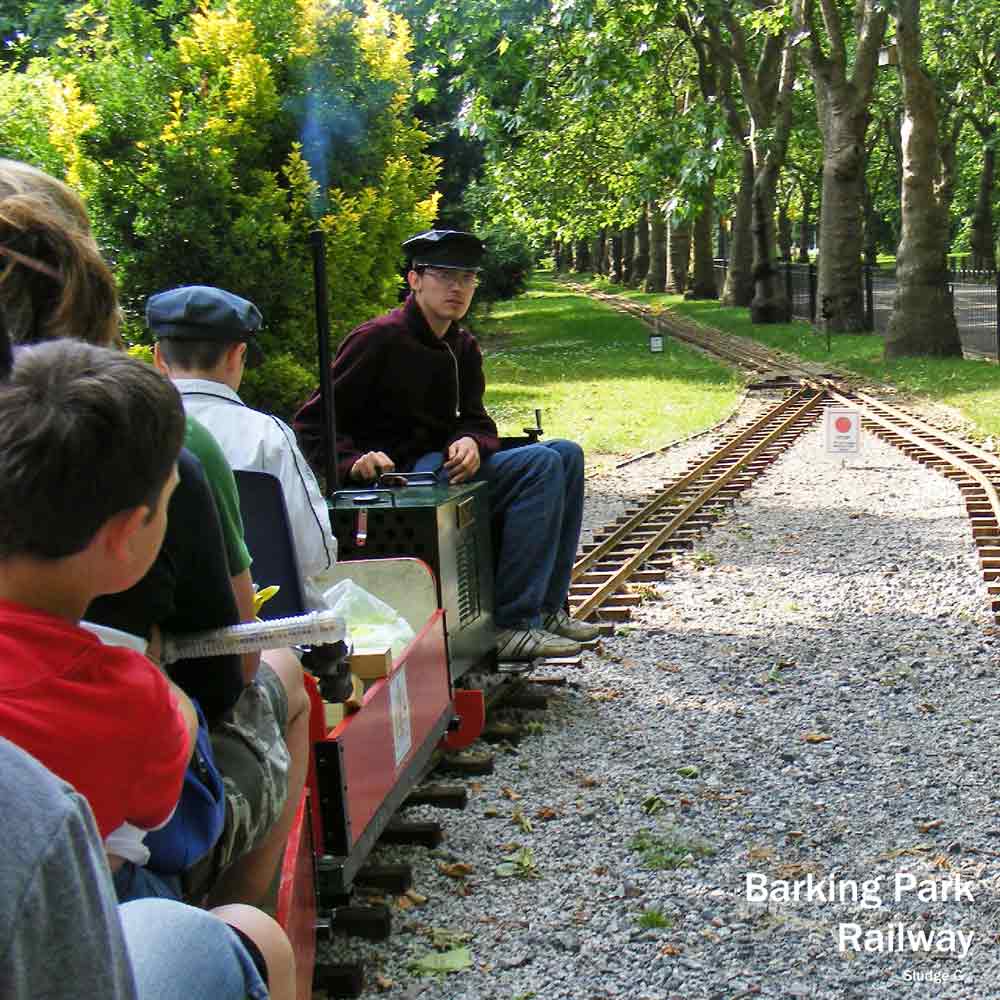 The ride on the train is only short and will only entertain for half an hour or so but there’s plenty for children to do in the park including a playground, boat hire on the lake, a splash park in the summer and some cool pond dipping platforms for exploring the wildlife in the ponds.

Lovely Eastbury Manor run by the National Trust is also just a mile away.

Roxbourne Park Railway is a lovely ride on steam railway in west London which has a range of tiny steam and diesel engines. The railway runs alongside the Yeading Brook in Roxbourne Park which also has a playground for children.

Ridgeway Park Railway is a tiny narrow gauge ride on railway in Ridgeway Park in Chingford in east London which has both steam engines and diesel engines and is popular with small children. The park also has playgrounds and a putting green.

The East Herts Miniature Railway has a good handful of very Thomas like steam trains. The railway is close to a lovely part of the Lee Valley Park so you could combine a trip to the trains with a wander by the River Lee.

The Great Cockrow Railway is near Cherstey so good for south west Londoners and has some very smart little steam engines.

The Spa Valley Railway is further out of London in Tunbridge Wells but is great for a big day out from London as it is a full gauge steam railway – with bigger engines than the Epping & Ongar line – that runs through the Sussex countryside to Groombridge Place a historic house with big grounds including an adventure playground.

The Bluebell Railway is one of England’s loveliest old steam railway lines and is just outside London in East Grinstead. The line is long enough for a big day out from London and there are beautiful old stations along the line with things to see and do including a museum.

So there you go. A big old list of London steam trains and railways and the best places to enjoy both steam train rides and model trains in London with your train mad kids. I hope they keep your little train spotters happy.

Do bookmark or save the list for quick reference and for more fun things to do in London with your kids check out these other posts: