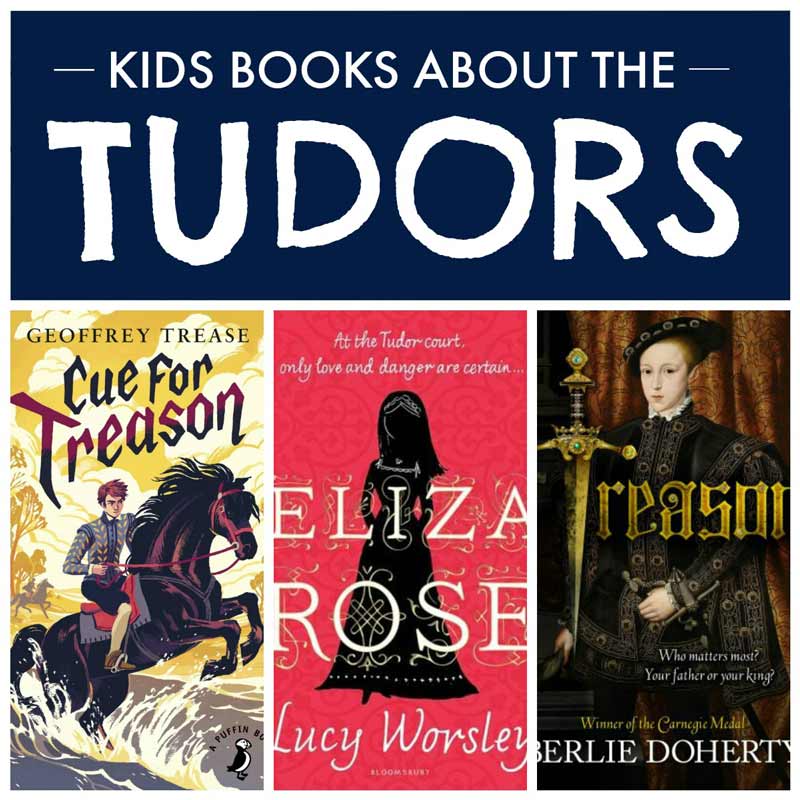 (This post includes affliate links, read here how these work.)

Those Tudors were pretty terrible weren’t they?

All that divorcing, beheading and dying business.

Not to mention burning at the stake. Torture. And More.

But kids, they LOVE it!

Now these include of course fab comic book histories like The Terrible Tudors (UK).

But even better – I reckon – some great kids stories about the Tudors.

Packed full, of edge-of-your-seat adventure, they really open up history for kids.

It all has much richer meaning for kids, explored through a story.

So, what are the best kids books about the Tudors?

Well these are seven of our our favourite Tudor books to get you started.

Kids Books About The Tudors

Treason (UK) by Carnegie award winner Berlie Doherty is set at the end of the 1530s.

It’s been one of the most momentous decades in English History.

And Will Montague’s family have struggled to cope with the changes it has bought.

Henry VIII, desperate for a male heir, has split with the Roman Catholic church.

And demanded the rest of the country do too.

But Will’s father cannot give up his old faith and the old ways.

Which puts the whole family at risk of Henry’s wrath.

And forces Will to make a daring escape from the King’s court to France.

As an introduction to the Tudors, Treason takes some beating.

Through a page turning adventure, it shows you the tyrant Henry becomes.

Plus the machinations of Tudor court life.

The poverty but strength of ordinary people.

And the sadness of what is lost in any great political change.

Eliza Rose (UK) is another recent kids book about the Tudors.

By historian Lucy Worsley it starts in the same year as Treason.

But is told through the eyes of a young girl at court, Eliza Rose.

Through her marriage and gruesome beheading!

Although, written for kids, Eliza Rose, doesn’t shy from showing the darkest sides of the Tudor court.

So perhaps better for older kids.

Mark Twain wrote the The Prince & The Pauper (UK) all the way back in the 1880s.

But it is still a humdinger of a book about the Tudors for kids today.

Twain’s language IS definitely harder for kids to follow than they’re used to.

But the basic premise of Henry VIII’s only son Edward swapping places with a pauper is riveting.

And the nail biting twists by which Twain gets them back where they belong are masterful.

Along the way, kids are offered massive insight into both the Tudor court.

And the harsh struggles of ordinary London life in the 16th Century.

As the writing is more challenging, it’s a fab book for a big family read together on holiday.

Cue For Treason (UK) by Geoffrey Trease is another rip roaring Tudor adventure for kids.

This time Henry VIII is dead and buried.

And his daughter Elizabeth is finally queen.

But up in the wild Lake District of the north all is not well. 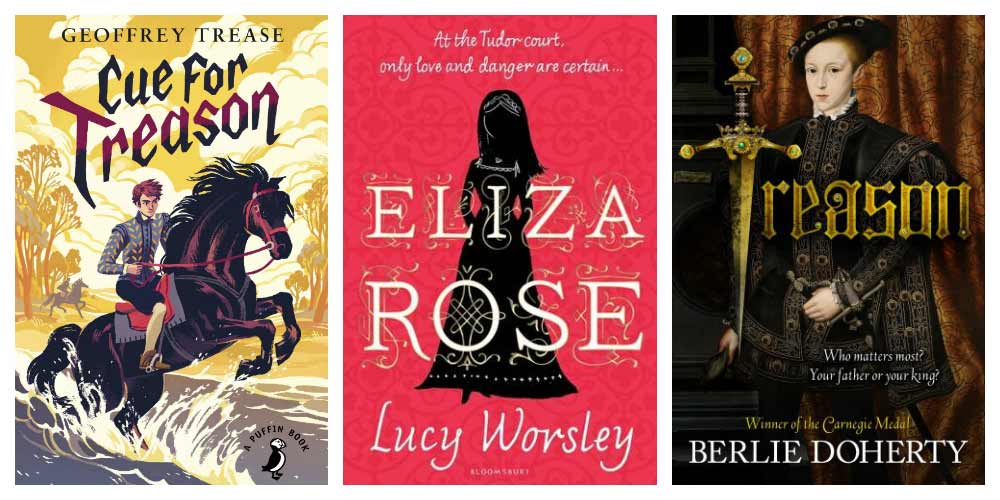 And when Peter and Kit fall foul of the mutineers, they have to escape their homes with the help of a group of wandering actors.

And travel the length and breadth of the country to warn the queen before it’s too late.

Again there are twists and turns a plenty before they save the day.

But also large dollops of humour. And Shakespeare.

And a brilliant role for Kit who is not quite who “he” seems!

Nominated for the Carnegie Award, it offers kids both the Tudors AND time travel.

All in one book. How good is that?

As always with Susan Cooper, nothing’s quite what it seems.

But in the end, Nat comes to understand much more about his present through the past.

Which has got to be a good message to share with kids hasn’t it?

In Rosemary Sutcliff’s, Brother Dusty Feet (UK) we get even more Tudor theatricals.

When young Hugh and his trusty dog Argos escape to join a band of strolling players.

Brother Dusty Feet doesn’t have all the fierce drama of Rosemary Sutcliff’s most famous kids books.

But with her phenomenal attention to historical detail.

And her ability to take you inside a character so you see the world as them.

She gives kids a chance to experience the ups and downs of ordinary Tudor life for themself.

My final recommendation for kids books about the Tudors is Traveller In Time (UK).

It was one of my favourites as a kid.

Where she is caught up in a plot by the Babbington family – who once owned the house – to replace Queen Elizabeth with Mary Queen of Scots.

Who’s side is Penelope on?

And can she and should she change history?

And save the ill fated Mary?

But it’s a beautifully written book about the end of the terrible Tudors.

That perfectly sets kids up for the “slimy Stuarts” who come next!

If you’ve got a history mad kid – or want to get your kids into history – I do hope you enjoy these.

For more great historical fiction books for kids check out these reading lists : 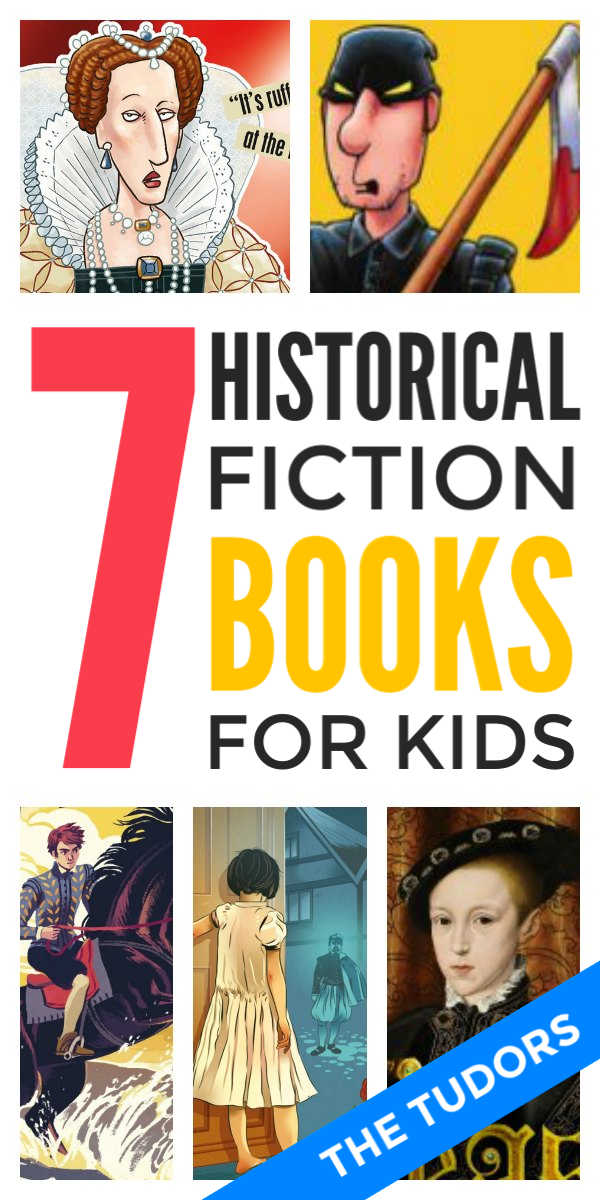 Previous Post: « Seals Near London
Next Post: How To Tidy Up Fast When Your Home Is A Mess »