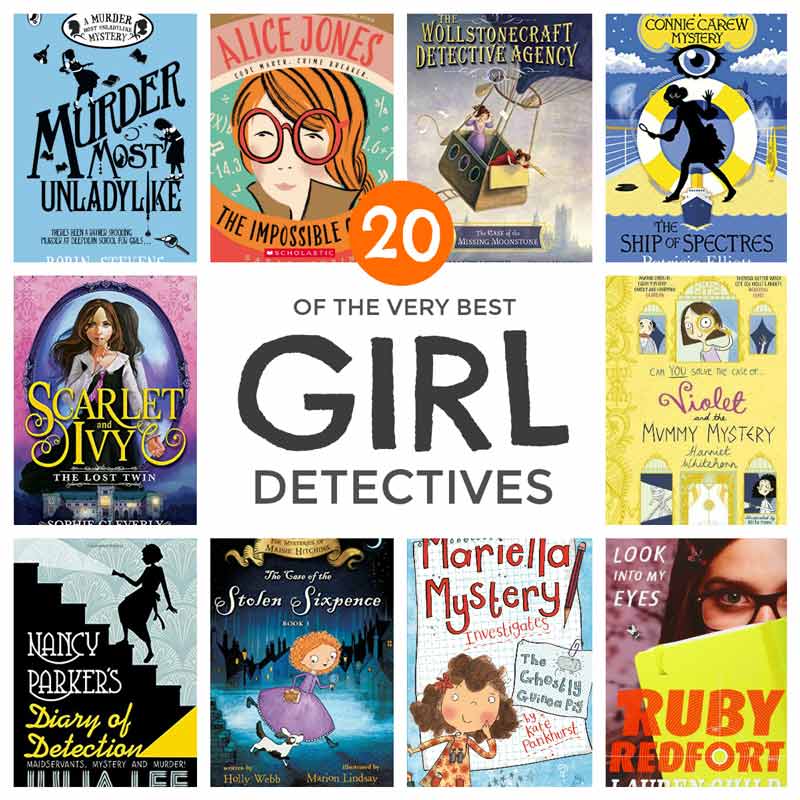 NOTHING beats a page turning detective story to hook kids on reading, does it?

The mystery of whodunnit IS irresistable.

And even more so NOW for girls.

Because there’s a whole ARMY of girl detectives out there.

Busy, cracking the most fiendish of mysteries.

In both long standing AND new detective series.

Which is great news.

As the only problem with detective series is … we get through them too quickly!!

SO if your kids – girls AND boys – are after great new detective series, try these.

They’re some of our faves.

Sophie Taylor and Lilian Rose triumph against the most dastardly criminals in Edwardian London.

Until in the finale of Katherine’s Woodfine’s best selling series they SAVE the King himself!

Starting with The Clockwork Sparrow this is crime fiction at it’s best.

Daisy Wells and Hazel Wong may be 1930s school girls.

BUT that does not stop them from solving murder mysteries.

When everyone else – including the police – are stumped.

Robin Stevens series – which starts with  Murder Most Unladylike or as it is known in the USA Murder Is Bad Manners – is ongoing with her latest released yesterday!

No criminal would want to come up against the combined minds of Ada Lovelace AND Mary Shelley.

BUT that’s exactly what they face in the Wollstonecraft Detective Agency!

AND maths genius, Ada and – later to be – Frankenstein author, Mary make an unbeatable pair in this fast moving series from Jordan Stratford which starts with The Case of the Missing Moonstone.

A brilliant introduction to literary greats. BUT laugh out loud funny.

Or at least not for twin detectives Scarlet and Ivy at mysterious Rookwood School.

Where there’s always a new secret to be uncovered.

Starting with The Lost Twin (UK), Sophie Cleverly’s series has been another best seller with book 5 just published at the end of last year.

And want more in the same vein, you’ll love these next four.

Orphan Connie Carew is another girl detective in Edwardian London.

Who in the The House of Eyes has to uncover whether her family ARE who they SAY they are!

There’s only two books so far in this series from Patricia Elliot.

But a great read – especially for Taylor & Rose fans.

As is the new Rose Raventhorpe series.

Which started with Black Cats & Butlers (USA) last year and is already onto book 3.

Set in a mysterious York sometime in the past – it’s not clear when.

Things get off to a bumpy start when Rose’s butler is murdered.

And he’s the THIRD butler to die that week!

Rose has no choice but to get out and investigate.

Lady’s maid Pattern is the heroine – and lead mystery solver – in another new series.

In the first book – The Last Duchess – she has to save the orphan grand duchess of Elffinberg.

And in book two – out this week – she is sent to solve supernatural mysteries on the isle of Cull.

This time, untangling murder mysteries in the roaring 20s.

The third book in the series – which started with Diary of Detection  – is just out in the UK.

Although not published yet in the USA, you can find Nancy’s adventures second hand on Amazon.

Talking of Nancy, NO list of girl detectives would be complete without Nancy Drew would it?

She solved her first mystery – The Secret Of The Old Clock – back in 1930.

But is still inspiring and entertaining a fourth generation of Nancy Drew wannabes.

Now the next girl detective on this list – Cat Royal – isn’t strictly a detective.

But as she marauds her way across 18th Century London and Paris via the newly independent United States, the Carribean and Scotland, there is always a mystery to solve.

And it is ALWAYS Cat with her irresistable flair who solves it.

Julia Golding’s award winning series – which starts with The Diamond of Drury Lane (UK) has finished. But seven books long, it will keep the most avid of readers going for a good while.

We loved it! And were desperate for another.

Flavia Gemina is another mystery solver extrordinaire from long ago.

BUT this time from ancient Rome.

Where against the backdrop of momentous events – including Vesuvius erupting! – she unlocks the most head-scratching puzzles.

There’s seventeen books in Caroline Lawrence’s series starting with The Thieves of Ostia.

Which should keep even the MOST voracious reader going for at least a fortnight!

Victorian England also has an ace-girl slueth in the shape of Sally Lockhart.

She never intends to be a detective but mysteries follow her around.

And she has to be at her braintwisting best – AND bravest – to get to the bottom of them.

Philip Pullman’s series – starting with The Ruby In The Smoke – is a slightly older read. Closer in darkness to the end of Harry Potter rather than the beginning.

Now, not ALL of our girl detectives are stuck in the past.

And the go to girl in school for logical problem solving of every mystery.

But in the The Impossible Clue she faces a riddle even she can’t solve.

Alice may be the smartest of cookies BUT she’s also seriously funny.

The Impossible Clue was a laugh-out-loud hit in our house.

Oh … and secret agent. Of course

Stuff full of Lauren Child’s signature quirkiness and humour, this six book series – which starts with Look Into My Eyes(UK) – is a big hit in junior and middle schools.

Set in Botswana, these not-half-as-simple-as-they-look mysteries are beautifully written.

And accessible for 6 to 8 year olds just getting started on chapter books.

Starting with The Great Cake Mystery – Precious and the Monkeys in the UK – they relate the childhood detective work of Precious who goes on to found The No 1. Ladies Detective Agency.

The fabulous Ottoline is another great girl detective for younger readers.

BUT Chris Riddell’s heroine has all the quirkiness and character of her elder sisters.

The ongoing series started with Ottoline & the Yellow Cat

And the latest – Ottoline & the Purple Fox – will be out shortly.

Maisie Hitchins is another must read sleuth for younger readers.

The creation of best-selling, ever-popular Holly Webb, Maisie starts her adventures in
The Case Of The Stolen Sixpence.

There’s 8 books in the series so it’s a great one to keep younger readers reading.

As is the Mariella series from Kate Pankhurst.

Starting with the The Ghostly Guinea Pig, they are great fun, more than slightly crazy and comic book illustrated so will appeal to even reluctant readers.

Living in a haunted house with her Uncle Drac, she’s not a typical girl or a typical detective.

But in she pits her wits against the spookiest of opponents.

And of course wins every time.

So there you go. 20 totally brilliant – and utterly inspiring – girl detectives your kids will love.

I hope your family enjoys them as much as we do.

Do let me know your faves.

It is JUST about books! 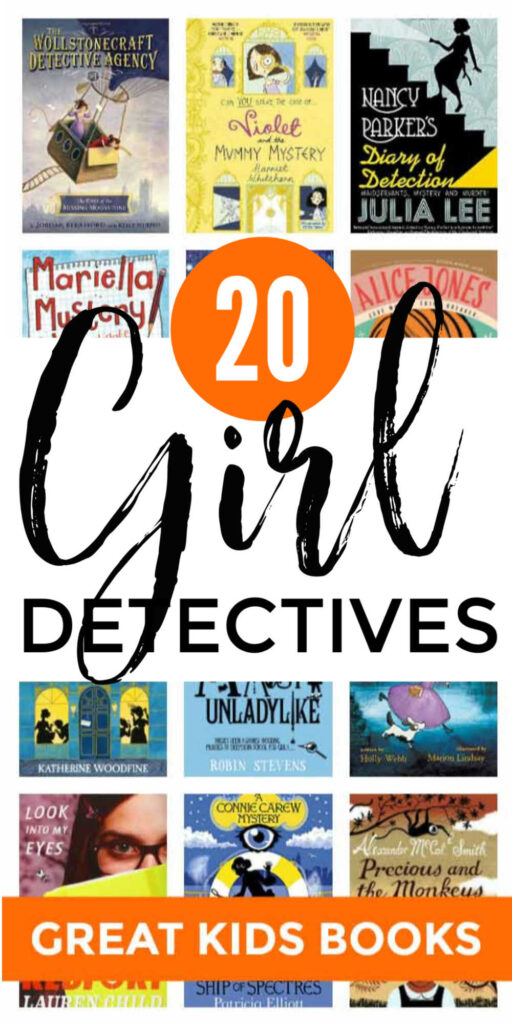 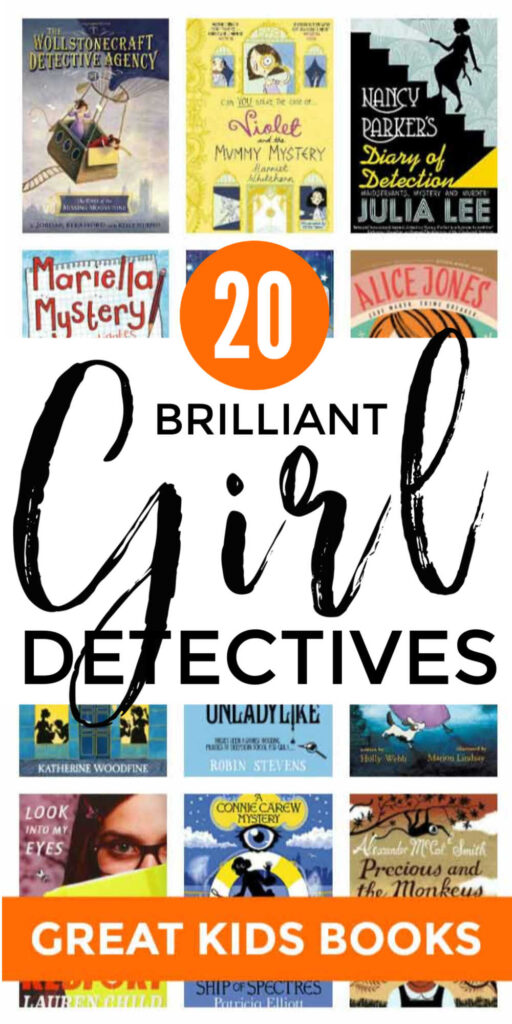 Previous Post: « Easy Ways To Save Money
Next Post: How To Get Energy Back After Being Sick »